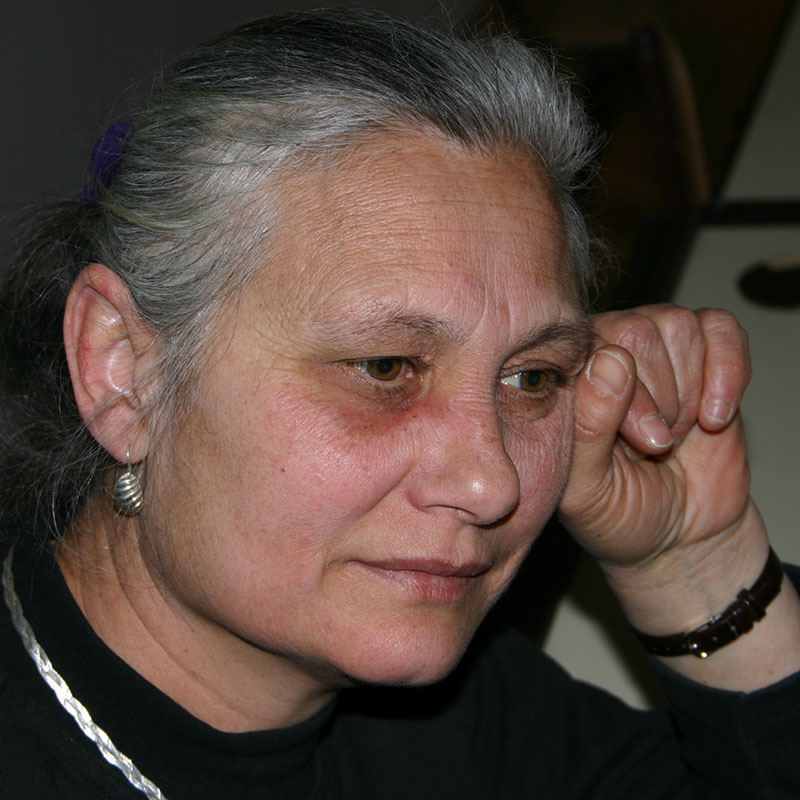 ‘I was born in Erdőtarcsa, in Nógrád County in 1951. I come from a family of seven. My parents were making adobe bricks and collecting rags. Only two of us finished the elementary school – my sister and me. The gipsy community, the country and nature surrounded us. Before falling asleep my mother would tell us tales. When mourning the custom was to keep vigil, to be a solace until the burial of the deceased and during this time if somebody knew old stories, shared them. I do not like the surroundings we are living in now – probably that is why I long after my childhood. The forest does not look the same as before. Neither do the plants nor the waters. Nature is broken, just like people are. In the old days people were eager to help each other. Only money matters now. Between 1963 and 1976 I worked for the Budapest Ceramics Factory as an unskilled labour. At the hand painting workshop I had a chance to design floor tiles. Then I worked for the Town Management Company of Gödöllő as a cleaner. I have been painting since my school years. My painting evolved with the help of Iván Remsey and Pál Mizser artists, and Lilla László art teacher. I worked for years and they did not interfere with it, even though they could have since they attended college. They could have shown me the direction or told me what was wrong, but Iván Remsey explained me that he did not want to ruin me. They saw some kind of ancient talent in me – I could not grasp what that was at all. While teaching he corrected others, drew into their works and explained why something was wrong. Sometimes he found some smaller or bigger mistake in my colours, too. Then we discussed which colour is not good, or why I added a certain colour and what suited my work. But he never tried to influence me on the subject or how to draw. He said my style would form slowly, but I had to practice. It happened like that – I slowly found my style and applied for the High School of Fine Arts. My teachers supported me because I wanted to be an artist. Then I was rejected – they said I had the skill, but unfortunately I did not have the education required as I attended special school. So they did not accept me. I used to have speech defect and it can be still detected. At that time all my siblings attended special school.’