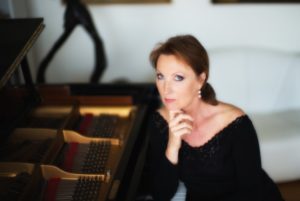 Mūza Rubackytė was born in Lithuania, and shares her time between Vilnius, Paris and Geneva.

After diplomas at the Tchaikovsky Conservatory of Moscow, in 1981 she won the Grand Prize at the Liszt-Bartok International Piano Competition in Budapest. A member of the Lithuanian resistance, she was only able to leave the USSR in 1989.

World known concert pianist she has 40 concertos with orchestra and 40 recitals in her repertoire.

In Lithuania, the President of the Republic awarded her the Legion of Honour for her actions for independence and several decorations for her commitment as a cultural ambassador. In 2018 Mrs. Mūza Rubackytė has been named Commander of the Great Cross of for her services to the Lithuanian State.

In 2012, the Hungarian Ministry of Culture awarded her the “Pro Cultura Hungarica” prize for her promotion of Liszt’s legacy. President of Lithuanian Liszt Society « LISZTuania » and member of ILA (International Liszt Associations) she is often invited to take part of F. Liszt Competition’s Jury’s in Utrecht and Weimar.

Founder and artistic director of the biennial Piano Music Festival in Vilnius Mūza, always up for the latest challenge. She played the complete “Years of Pilgrimage” at Bayreuth and at the 10th Liszt Festival in Raiding, the complete “24 Preludes and Fugues” by Shostakovich and F. Liszt’s “12 transcendental etudes” at the Radio France Montpelier Festival.

FacebookTwitterEmail
We use cookies to ensure that we give you the best experience on our website. If you continue to use this site we will assume that you are happy with it.Ok